I fully expect to catch flak for this posting…

It amazes me still why people do not keep a survival kit ON THEM when they are out in the woods doing the things they love. Here is the story of three people who could have made their situation much better if they had only taken simple necessities such as a few power bars, water, fire kit, and whistle.

I guess I should point out that I am really glad that they were rescued. Now that we have that out of the way- let’s ponder for a moment the lives that were at risk looking for these three, the tax dollars spent, and perhaps resources that were at risk of being diverted from something that is a little less predictable such as a accident or lost child in the woods.

Most search teams are well trained volunteers using their own time and resources. This can be a personal financial drain. If I was called out for a search today to fly- I would spend about $90 per hour out of my own pocket. Others take off work or cancel other commitments. Don’t get me wrong, I feel strongly about helping in SAR missions and would not trade a single mission I have been on for anything, but to do one when it could have been prevented is something entirely different.

Even a simple and low-budget gps has the ability to get you back to your car and the resilience of a map, compass, and the skills to use them will save your life.

Six days is a long time to be lost. Many people don’t make it that long. I would suspect that there will be long term effects from prolonged exposure to cold weather, drinking unfiltered water from streams, and the potential psychological issues associated with stress.  The father of the lost patrol suffered a back injury, while his wife had hypothermia, and their son had a sprained foot and minor frostbite. All three were dehydrated and obviously hungry.

Let’s examine just a few of their mistakes:

Imagine how this would be a much better situation if they had become lost, had a fire for warmth and signal, searchers calling for them and they could respond by whistle signal, and when aircraft flew over they could have fired a flare from even the smallest break in the trees.
Unfortunately, they could see rewards for putting others at risk and spending our tax money for their plight. I am sure there is a book deal or perhaps a movie about their six-day “shroom” experience in the future.

Keep a survival kit with you at all times in the back country. Know how to use it. Practice using it. I hold training throughout the year sometimes at little or no cost (in some cases you only pay for gear and materials). Don’t become another “Stupid Survival Story”. 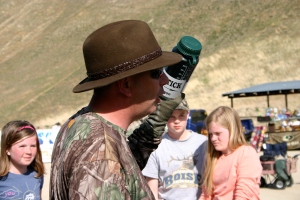 1 thought on “Another Stupid Survival Story”