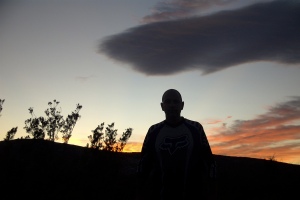 "Portrait of a Dead Man"
When I took this, I honestly thought it would be one of the last pictures of me alive. Then I changed acceptance to commitment

In the fall of 2003 I decided to do a overland trip by mountain bike in the back country of Big Bend National Park. Don’t let those four letters, (P, A, R, K) fool you. There are areas in most of our national parks that are rugged and desolate. Big Bend has many of these. People die here, and I was almost one of those statistics.

I’ve never really shared this story in whole with anybody, and as I blog, I still may not….we will see.

Throughout 2003 my soul was undergoing some radical changes. I was beginning to live from my heart. I was regaining that masculine love of the outdoors that had become vacant and dormant for a season. I was becoming more of a leader in my home and fighting for the hearts of those I loved. I attribute a great deal of this to the work of John Eldridge in “Wild at Heart”, a book I bought on a whim and actually altered my entire life.

My plan was to bicycle from Rio Grand Village on the east end of Big Bend to Castolon, on thewest side of the park using the old River Road. This trip would take me down rugged back country roads through the old Mariscal Mining district, the Dominguez Trail, continuing on the River Road’s west side, and eventually to Castalon, where I would rest and then make the trip back the same way I came. 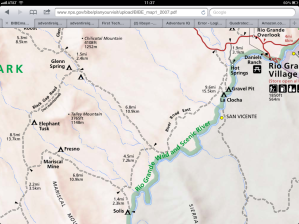 As an avid biker I was physically well prepared for the trip. At the time I was riding up to 200 miles of trails each week. I was riding a 2003 Specialized Stump Jumper with a Yakima trailer. I headed out with tent, food, and water. I knew I would have to resupply so I had supplies dropped for me at Castalon and knew which watering points were known to be active. I planned to have two days water with me at all times. 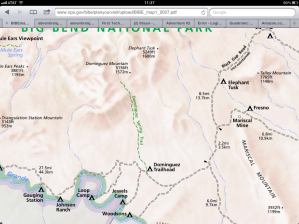 The trip began questionably from the beginning. For starters, after arriving at the park and camping in Rio Grande Village, I failed to get any sleep at all. There was a “star party” going on. I stayed up until sunrise with several astronomy students learning various stars and constellations.

The second moment of failure was when I found I could not park as close to the trailhead as I expected. I had to add additional miles to my already long trip. I had planned to do the entire route in 5-7 days, so I saw the setback as a minor inconvenience.

A larger inconvenience though came at the hands of nature. I knew there had been a flood in the area a week prior to my trip, and in fact was counting on that to fill the springs and arroyos that I would need for water.

What I failed to realize is the damage flash floods can do to the roads and trails I would be pulling a 60 pound trailer on. I struggled miserably with the load and at times had to push my bike through river gravel that would vary between 3 to 8 inches in depth. It took nearly a full day to get to my “planned” lunch stop at the fork between Glen Spring and Mariscal. At this point I was exhausted and dehydrated. I spent the evening trying to rehydrate and take in some energy. 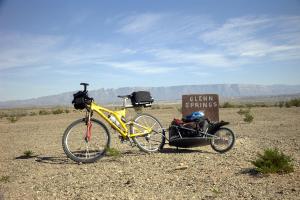 Dragging water and other supplies. Only thing missing in the pic is my water bladder that also worked as a head rest...for a time.

My body immediately rejected the Top Ramen noodles I had prepared. I set up a tent and tried to rest my aching muscles. The only thing I could keep in me was dehydrated ice cream my wife gave me as a joke.

The next morning I felt better, even though I didn’t rest well. I was able to eat some oatmeal, and my urine was returning to clear, signaling that I was rehydrating. I loaded up the tent and returned to the trail. At the fork between Fresno and Solis, the road became a bit better. I no longer had to deal with as much gravel and was able to pick up speed.

I had over-estimated my water needs so I was doing okay in spite of not hitting my next refill point. The trail still required more effort than I had expected and I pulled into Fresno around 3 pm. I decided to stay there even though it put me a day behind schedule. Again as I tried to eat I couldn’t keep anything down.

I set up my tent and decided that I would rest and then re-evaluate the trip when my head was not pounding. It was when I was pulling my tent out of the trailer I discovered in horror that at some point my water bladder had busted. With exception of a tiny bit in my bike mounted water bottles, nearly all my water had either escaped the trailer, or was captured in my tent, clothing, etc. I immediately started consuming as much water from the soaked items I could. I knew at that moment my world was going to be different and if I was going to make it out, I would need to be thinking clearly. I knew this was now a life and death situation.

Looking at the map I had two options. Continue west towards an intermittent spring about a day (on the map) and take my chances on water being there, or head back two-days to where I knew water would be. From what water I could not drink, I was able to fill two bike bottles with water and a partially filled Camelback. Technically it was a lot less than I had been consuming per day. (I had been consuming 1-2 qts per hour…. I now only had water for a few hours, not days.)

At 3 am as the sky was dark and temperatures dropped below freezing, I began my trek back towards civilization. I walked bike and trailer along the path on a moonless night with only a small headlamp I brought along for reading and other camp duties. At the time I was an avid night rider and spent most of my time on the trails after dark when the trails were vacant. I had purposely left all four of my trail lights at home to save weight and remove the temptation of traveling at night, where I felt I was more prone to injury.

As the sun rose in the east, I began to ride for a bit before the temperatures began to climb. The desert is odd in that even-though we had sub freezing temps at night, it would quickly climb to a blistering and mind altering oven in just a few hours of daylight. When I began to feel the increase of the suns rays on my body, I stopped and created a shelter using the bike, tent, and trailer. The wind was picking up and I was concerned that the combination of heat and wind would steal away any moisture my body was trying to conserve. I laid myself under the lean-to, tried to conserve energy, and when not sleeping, kept myself busy studying the map and writing in my journal.

Around 10 pm I began my trek again. I had a bit of rest and in spite of having less than a water bottle left, I felt ready to go. The temps had only dropped into the 80s at this point, but I wanted to get moving. At this point I was pushing through the thick gravel again. I know I wasn’t as aware of my location and surrounding as I should have been but I remember that I resolved to keep to the right side of the road. This way, if I went down the wrong fork, I would wind up at the river. If I stayed my course, even in the confusion, I would be headed back to Rio Grand Village. Somewhere around midnight I drank my last drop of water.

At 645 the next morning I knew I was going to live. I was out of water, severely dehydrated, and barely moving on the bike. It was in a gulch that as I passed through I was gifted with thousands (and thousands) of Monarch Butterflies migrating along my path. I can’t explain it, and maybe it was a private moment for me, but I knew I was going to make it.

Pressing on through the heat I finally made it back to Rio Grande Village, although I have no idea what time it was but knew it was late afternoon. I walked into the store near the camp ground and drank a Gatoraid before paying for it. I think the clerk could tell what was up and never even questioned me. I spent the rest of the day and evening recuperating and the next morning I headed home.

2 thoughts on “Portait of a Deadman”