When I picked up my Jeep Wrangler one of the first things I sought out was a rear swing bumper for spare tire, gas cans, and tools such as an off road jack. I bought my Jeep completely bumper-less. I am an inexperienced welder with equipment that really isn’t up to par with what is required for a solid build. Fabricating mounts for lights, tool racks for a trailer, even mounting hardware for the on-board info systems…sure. A good set of bumpers and hardware to carry gas cans and other off road tools…well no.

I first went to a local fabricator listing his services on Craigslist. My first clue to the quality should have been that he was 30 minutes late meeting me at his “fab shop”. The dirt floored shop behind his house littered with tools, his air wrench was a 3 gallon electric compressor that had to be constantly recharged with air (I literally used a hand powered socket set on a set of screws faster than he did with his air powered tools), and he wasn’t using washers on any of the bolts when he put the bumper on.

In a few weeks the bumper through all the vibration started tearing out of the frame. My buddy Greg and I welded in support plates, but it never really stopped the vibration issue. In the end, I wound up putting my old tire carrier on and using just the bumper. 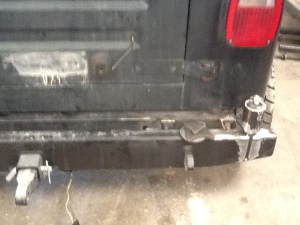 Using my bumper as a base, they rebuilt everything, increasing strenght and durability

I then took my project Jeep into the guys at Get Some Fabrication in Boise, Idaho. They quickly diagnosed the problems, pointed out the flaws in the design of the swing gate set up, and we set out together to build a new swing gate. 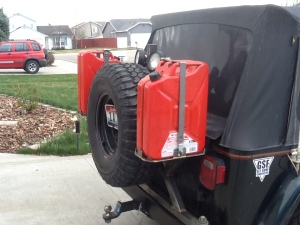 They used my existing bumper for the build, in which they reinforced it. You want a good solid platform on the bumper, not only for the tire and gas cans to be supported, but this is what another rig is going to hook into when you get YANKED out of a ditch at some point. Using larger section of steel they modified my current bumper.

After that, and through some back and forth decision making, they built a new tire carrier for me and made custom gas can holders. We opted to not place the hi-lift jack on the back since I travel allot of washboard trails. It’s not that they can’t build for that, it was more of a “why put it there” when I have plenty of space on my hood for it, which is really where I intended to move it. They also pre-built a space for a rear safari rack above the tire. 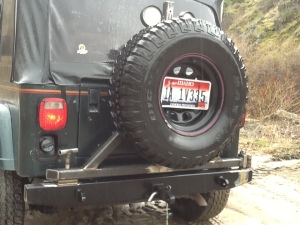 I am very pleased with the work that they have done and through a week of testing with full gas cans up and down the trails (all are washboard as a minimum right now) there is almost no vibration or excessive noise.

I highly recommend these guys and so glad they stepped up for this project. Going back to them to have a front bumper built, an overhead safari rack, rock sliders, and suspension work done. Located on Franklin Road in Boise, they can be reached at (208) 888-3565. You can also check out some of the cool stuff they have built on their website.