One of the reasons I love these small scale adventures is all the cool gear you can get that is funtional. Sure I like the ice-chest and tool box that bounces around in the back of my mini Wrangler, but to have items that really work like tow straps and winches are pretty awesome.

I picked up my first set of sand ladders just before my first G6. For under $20 I had a set of MaxTrax sand ladders like my big scale rig has. They were used within the first 15 minutes of the start of the G6 in Bend, Oregon when after working our way through a maze of mud and sludge, we had to climb over a few ruts that was giving other drivers fits. I pulled the ladders off the roof rack of my little Jeep and Abby and I glided over easily where others were getting stuck.

I had noticed at the starting line at that first scale adventure how many different types of ladder systems there were. Many had been home built, while others were definitly manufactured. All had something in common, there were all longer than my set.

Over the next week I struggle to make a set of my own. They either looked great and were non-funtional, or were perfect bridging devices that looked like a sixth-grader’s shop project gone wrong. I went into my second G6 in Sparks, Nevada with my MaxTrax.
I used them a few times either alone to bridge or decrease an angle of attack or to help with my winch on an obstacle. They were fine until We went into the night course, which had a route that took us through a parking lot. Going off the curb….no issues. Going up and over a curb, my little orange bridges were too short and I wound up following another driver up his home-made bridges that were twice as long.

The following week I ordered a set of Siege Ladders from DS Pro. Twice in length and slightly less expenseive, and regionaly made from a great guy over in Oregon. I decided to test them right away.
They areas tested:

1) Scale Look – Here I think the MaxTrax wins without question. This is probably due to the fact I have a set for my big rig. They look like the actual ladders in production. With that said, since MaxTrax is also made in blue, black, and grey there should also be options for the other colors. The DS Pro looks good, and I hate to down grade it here, and as you will see in a moment…form does not discount funtion.

2) Durability- Before I comment, I have to give huge props to DS Pro here. In transit my ladders showed up warped. Probably happened in the mail along the way. Within 48 hours DS Pro not only had a new set to me, but was looking for ways to help me salvage the other set. I have had issues with other RC accessories and service has been hit and miss…DS Pro takes care of its customers.

Because of the geometry of the MaxTrax, there is less space for flex, especially when under stress of bungee cords. In addition, they use a concave shape to help strengthen overall load. They also have reinforcement on the long-axis of the ladder. There are small cutouts along the edge for mounting with a bungee, and under minimal stress, have either torn or stretched out of position.

The DS Pro ladders are longer and more suseptable to flex. They have smartly placed reinforcement along the two outer edges so there isn’t hardly any flex when under load. They have also been on the rig as it took a 30 foot tumble down the side of a rocky bank and did not break or bend, eventhough they protrude beyond the roof rack. I would like to see a slightly different plastic formula used since it is suseptable to bending like it did in the mail. I am curious as to what it will do in the summer. It does not seem at risk of snapping in cold weather. I drove today for about 6 hours in temps ranging from 29° to 36° and used the ladder for testing…no cold temp issues.

3) Usability- This is tough. Most likely, each has its specific place that shines, but here is where the Siege Ladders shine. The ladders not only long enough to bridge large gaps and provide a much better angle of attack, but are long enough that you can shove them deep into soft dirt or sand and they will stay in place as you transition out of the rut you are in. I will carry both sets, but if I had to pick one, I would most likely use the DS Pro product based on this alone.

4) Traction- for both sets, tracting was an issue, though the dimples on the MaxTrax were only slightly better. Only slightly, because with the siege ladder you have more options for angle of attack. Change the angle so you aren’t trying to drive as steep out of the sand trap. If there was some grip on the DS Pro ladders….outright awesome.

5) Overall Satisfaction- Again, if picking one…DS Pro. I really like the look and the ease of mounting of the MaxTrax, but for the reason of needing a ladder for urban and rocky environments, I would have to use the longer ladder. The other reason is simply the company taking care of me. I work hard for my RC gear and I hve to do it for Abby and Melissa as well (not always same brand- just same option), and when a company steps up to take care of me, it means allot.

With that said, I am sure RC4WD has some fine folks working there. But with our winch projects, I have already seen a lack of insight, like putting screws to mount the winch to the bumper in the packets or at least telling me up front I would need them. Still, they have a history of making great products.

You can’t go wrong with either set. MaxTrax look great and will do most of the work. Siege Ladders, best all around and will be my go-to set when I am stuck.

Be sure to check out our Facebook page for the video of these guys in action and be sure to tune into our podcast for more info on these and other adventures.
http://www.AdventureIQ.com 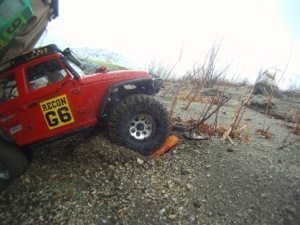 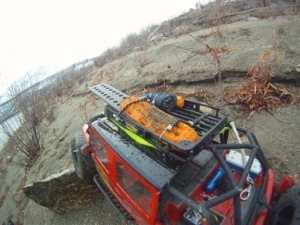 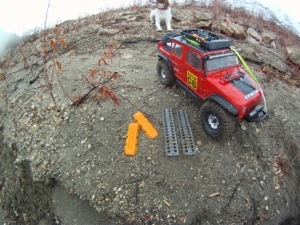 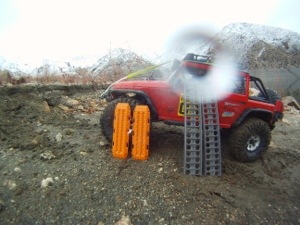 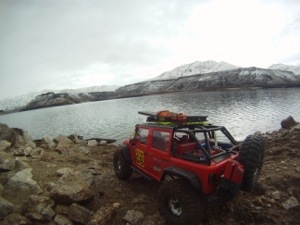 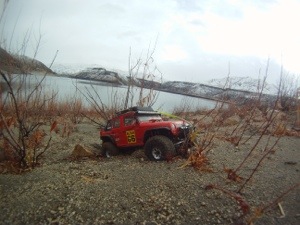