People really don’t know who I am and most of my friends now don’t know who I was and from the pit I emerged from. There are times I still battle the two who live inside of me. One wants to do the right thing, play nice, get along with others. There is another that at a moment is ready to pounce and thrive on destruction. Jekyll and Hyde.

In 2006 I received some very disturbing news that I believe to this day grounded me forever. Prior to that I walked a very confident and often cocky walk. I had been humbled a few times and think that at the time I was on a more humble path.

For 13 years of my life I knew I was in the top tier of my profession. On top of that I never allowed anyone to mess with me. I wasn’t afraid to speak my mind, stand up for myself, tell others where to put it. I never backed down from an opportunity to go toe to toe and if violence was the answer I gladly took my licks but made that the other guy knew he had been in a tussle. I once put a guy nearly twice my size down in the parking lot of a small stop-and-rob store on the south-side of Ft Worth and even turned to his buddy to ask if he wanted some.

I was well trained and did a few deployments to some not-so-nice places in my military life that only added to the confidence. I wasn’t a braggart about it- but the walk was different. I even looked for a way to begin making amends with several guys I had been stationed with over the years and when my apologies were rebuffed- I only stepped up the @$$ persona as a wall to build up around me.

As a kid I was picked on and when I went to ground combat training and then got selected for special assignments and schools, I found that I could put down the bullies if provoked and come out as a winner. But this only caused me to quickly spark if some ex-football jock decided to screw with me. The monster would come out and I took care of stuff.

In 2005 I felt that all of this was behind me. I felt I had put Hyde to rest and go along and be a nice guy. The dilemma I face now is that the easy-going folksy guy gets pushed a bit. Real life is a lot like high school all over again except you don’t get sent to the principals office for punching a bully in the face and shoving his head in a locker and we all know standing up to a jerk in a meeting at work and bashing his ego with well placed wounding words has more dire consequences than getting placed in detention for a week. (As a ground combat instructor my mission was to make young punks cry, puke, or quit the first few days of training.)

Face it, I used to play hockey in one of the most violent leagues in the southwest and even wore a kilt to see who wanted to make a dumb@$$ comment and then back it up. There was a point in life I was a real jerk. I didn’t go loooking for trouble, but when I found it I thrived on it. I did all this while sober because it was a tactical advantage.

Perfecting my skills in survival and bushcraft help to manage the two inside me. It allows for the calmness of Jekyll and provides a retreat when Hyde wants to counter punch with words or actions. As a side not, Hyde gets pretty pissed off when Jekyll is getting screwed with and disrespected for his expertise. Keeping these two in check is difficult whether its at work, following my passions and avocation, relaxing at home, or out running errands.

I have a kid on my block that races his car up and down the street. Jekyll says stay calm and at most talk to him. Hyde is seriously thinking about draining the oil out the block into a gallon jug and let him fry his engine…or better, launch a rock with a slingshot as he zooms by. Then there is my neighbor who shoots off fireworks at 3am. Currently he is a candidate for some pretty malicious actions. Hyde wants to return fire with a homemade grenades, but Jekyll wusses out and says, “Let it go”. 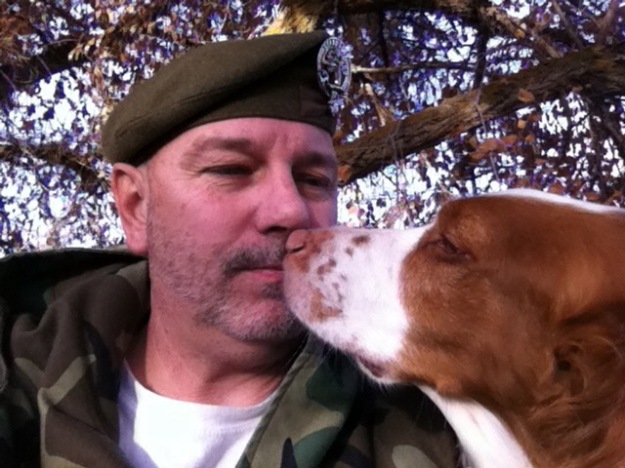 My pup help to keep Hyde away

I struggle often with the peace that people don’t know who I used to be and how much a jerk I was. Yet I sometimes secretly wish they knew and understood the monster that lies beneath and would just not poke him so much. Until then I am left alone to fight the two that live inside, Jekyll the meek wussy and the monster ready to drown people in their own spittle, Hyde.