My two favorite things in life is breakfast with my kiddo and flying. Since becoming a pilot I have been able to pursue both of these interest together.

My 11 year-old and I have been going to breakfast together for one-on-one time since she was 18 months old. This weekly ritual has very few gaps in it. To date we have had an estimated 1500 hours of time spent with just each other. A great investment in her life as a Dad.

So it is without question that the first weekend after receiving my Private Pilot Certificate that she was not only my first passenger- but my passenger on the way to breakfast. Checking out a plane from our co-op and making a short trip from Nampa to Caldwell was one of the most memorable “first” for both of us.

We have now expanded that to other destinations for breakfast. Lately this has been flying into McCall for our weekly Daddy-Daughter time.

McCall was once a logging and sawmill town but is now an all-season tourist destination for outdoor recreation. The resort town is known for its Winter Carnival, extended winters, and the highest average snowfall in the state. It is simply a beautiful place to fly into.

Flying in from the Treasure Vally you experience breath taking views of the mountains. On the ground there are several local places offering breakfast and the people are very friendly.

If you would like to experience flying on your own, shoot me a note on Facebook, I know of a few ways to get you started.

First the disclaimer: This randomly posted series has no order in which I am posting these- I write them as events remind me to thank those who have provided guidance over the course of my life. For more information about Adventure IQ go to the website

I was a young Airman, recently stationed in Germany. Motivated to try new things, stretch my boundaries, do cool stuff. Jeff Duhon was the ultimate adventurer for a group of “20-something” year old guys willing to take it to the next level and not be part of the status-qua. 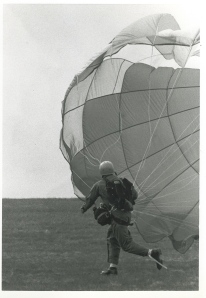 Jeff was the ultimate hook-up man. He provided training to our EST (Emergency Services Team – Air Force Anti-Terrorism/ Counter Terrorism and Hostage Release Unit) that made us truly elite. Jeff was always bringing in training such as Air Assault, Ranger Counter-Terrorism, German Special Einstadt Commando, or British Para to his small band of disciples. He was a no-holds- barred kind of guy who expected you to hold high standards when he hooked you up to work with British Long Range Commando teams or US Army Special Forces. Hook-ups? The man knew and even provided stunt work and coordination for Chuck Norris. How cool is that?

Jeff was not only an influence because of the special training or how that training helped me as I progressed as a Ground Combat and Special Tactics Instructor or the confidence that Jeff’s tutelage provided. (You do an slack rappel of a cliff in Belgium with someone you just met.) He was an influence in that all adventure is possible if you have the heart for it. More than anything, that was the main lesson from Jeff. I remember disappointing him greatly when I pulled a ligament so bad in my knee (the entire inside of my knee and thigh turned black) and I was on the verge of quitting on one of the classes he was providing on Air Base Ground Defense. That lesson stuck with me and after that- no matter how hard the going was- I never allowed myself to even get close to losing heart.

But I think the real lesson from Jeff was to lead from the heart and not what was on your sleeve. Jeff was only a Staff Sergeant at the time I met him. Yet he was arranging parachute and helicopter training, counter terrorism courses involving shooting from vehicles, and intense joint training with some of the world’s most elite soldiers. Yes there is something about “who you know”, but with Jeff it was how you leverage that relationship for the betterment of an organization. Jeff Duhon- Thank you