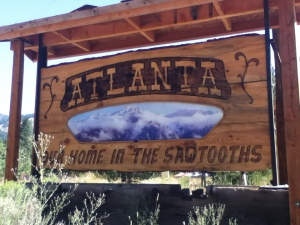 MOre than a home–its a gateway to the Sawtooths 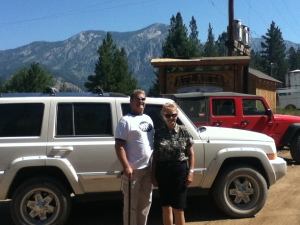 Mission Accomplished! Brad and his very sweet mother standing in Atlanta! I know I do trips with just me and my pup- but I really enjoyed having them along.

Atlanta was the first Idaho ghost town we went to shortly after moving to the gem state in early 2005. I have hunted the area with friends, taken several trips in the winter and early spring “trying” to get to the town, and have flown in there with a fellow pilot a few times. This last weekend I had a chance to take a good buddy and his mother out with me. She has lived in Idaho her entire life and has never seen it…so this mission had a purpose.

Placed on the head waters of the Boise River, Atlanta was founded by John Stanley’s prospecting party when they discovered gold in the area somewhere between 1863 and 1864.  The Stanley team had come through Bear Valley and the Stanley Basin before striking over to the head of the middle fork of the Boise. Though Idaho was not directly involved in the Civil War, Confederate sympathizers named the load “The Atlanta” after the Civil War battle of its namesake.  In 1865, the streets of Atlanta City were laid out and by 1867 it had a Post Office. Still working today is the Hydro-electric dam, though the aerial tramline used during a period of re-growth from 1904-1912 is no longer there. 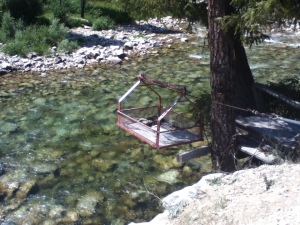 From its beginning, the highly remote location of the Atlanta lode made difficult to develop the district and to bring in the necessary equipment. However, the extremely high-grade ore available in quantity in made it easy in 1868 to interest a large number of British investors in the area. Through this investment, technical equipment and expensive machinery was brought in, increasing attention to the Atlanta lode.

Before major operations ended in 1953, Atlanta produced some 18 million dollars ranking it as Idaho’s major hard-rock gold producer. Periodically through the years, several investors have looked at mining the area, even using chemically dependent strip mining. 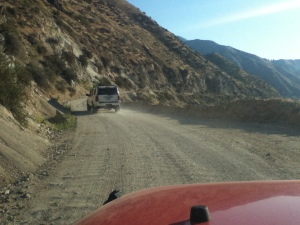 Atlanta is about 100 miles from our base camp in Meridian and 60 of that is on the barley improved Middle Fork Road built to solve the transportation problems of the mine. The road includes loose gravel and sand, shale rock and miles of washboard that will rattle any fillings you have in your teeth. This is the only access in the winter and the road becomes treacherous with ice and snow.

From Boise, we take Highway 21 to the Lucky Peak turn-off, which becomes the Middle Fork Road. You skirt along both Lucky Peak and Arrow Rock reservoirs, the Middle Fork of the Boise River, and see dramatic scenery from high desert plains to Ponderosa Pines. You can catch glimpse of Elk, Deer, Antelope, and Moose. Be sure to use caution of the road due to oncoming traffic, loose rocks and soil, and on occasion, deadfall on the roads. 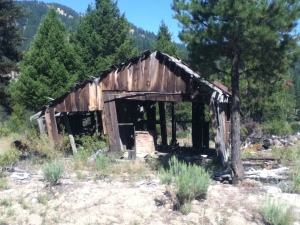 The other route is to drive past Idaho City and over Moore’s Creek Summit. Here you can take the Edna Creek Road. Take a solid set of maps, use an app such as Topo Maps for the iPad, and check where you are often. Roads and tails change names and while going straight on one road, it can change names with a slight curve. An example is how coming out of Atlanta, turning on Swan Hold, becoming the Owl Creek Road, and then eventually after a few other detours you are on Edna Creek. Granted, all different roads, just be aware that a single road does not take you on a single shot to your intended destination. 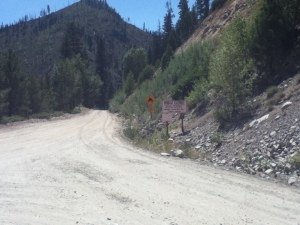 Take plenty of water with you, shovel, hi-lift jack, repair equipment and tools, and your survival pack. I have been stuck overnight in this area and if you are far enough back in, help is not going to be driving by. A licensed HAM operator with long-range gear can hit Schaffer Butte for comm. Since cell phone service can be up to a 60 mile walk if you break down. These roads on summer weekends are populated with all kinds of recreationist, on Sunday evening in early May, you won’t find help passing by. As for fuel, Going Lucky Peak/ Middle Fork Road, your last chance for gas is on I-84 and Highway 21. If going Edna Creek, top off in Idaho City. HIGHLY recommend at least an extra two-gallons of go-juice. On another note, be aware that there are active mining claims on this road. Please do not mess with the equipment, and don’t start turning rocks or soil looking for “stuff”. Last, don’t look like a typical yuppy tourist. These are hard-working folks that live up in the area. Don’t be a geek, you ruin it for the rest of us. 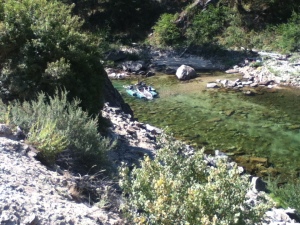 Hard to see, but those are prospectors down there working their claim.

We enjoy taking our time to stop for pictures of wildlife, historical relics, and scenery. A good hearty picnic lunch and even dinner can make it a great trip.