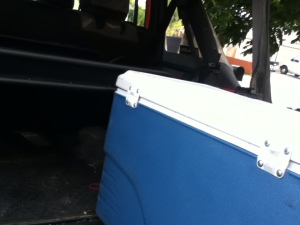 Ouch! We were told a 5-day chest or ARB fridge would fit…not so

DISCLAIMER: One of the things we pride ourselves on is HONEST feedback. It is purely based on our experience alone. I’ve lost sponsors and partnerships through honesty. My position is to give our audience what we feel are fair evaluations of gear we test. If it’s on my rig- I HIGHLY recommend it for yours.

We don’t usually dislike a product so quickly on this level. We are careful to select products from several weeks if not months of research. We make it a habit to talk to other users, check out the blogs, and even speak to sales or customer service reps about the product before we pull the trigger and throw it on the rig, put it in a pack, or try it on the trail.

With that said, we were finding little about the Rampage Products Rear Interior Sport Rack. We were looking for a way to better organize our gear in the back cargo area of our 2013 JK. The plan was to keep our 5-day ice chest under the rack along with other bulky items such as tool kit, chuck box, and Scepter 5-gallon water jug. We looked for details and dimensions from sellers, distributors and even the manufacturer. When we inquired a rep about it and relayed our expectations the response was, “Shouldn’t be a problem.” 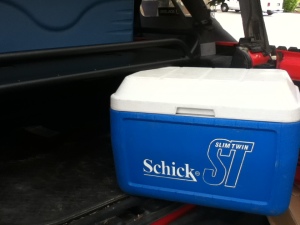 Even one of my smaller chest would not fit. I don’t know of any Jeepers that don’t throw some kind of cooler in the back for suds and grub…

It was a problem. I have four ice chests and not a single one could go under the rack. Even when we put the rack into the upright position, then the ice chest could not fit in length-wise. Space wasted…
For someone who isn’t toting an ice chest and simply need a better way to organize sports gear, groceries, etc it’s a good concept. The storage rack features a fairly sturdy steel tray that mounts in the rear cargo area. Putting it together wasn’t that difficult and I did it in about an hour with no drilling required. One of the things that made it slightly difficult with my soft-top and impossible on a hard top is the tubular brackets that go on the roll bar.The Allen bolts faced outward and I had to remove the rear window on each side to get to the bolts. 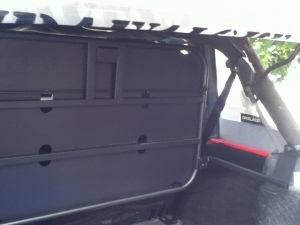 The concept of moving the tray out-of-the-way when not in use is unique in this model. On the bottom of the tray are two spring clips and a single gas strut allowing the rack to tilt forward providing easy access to gear located underneath. One problem though is the hooks don’t fully engage and a simple run around the block after installation and several attempts to adjust proved to be a waste of time. The thin bar at the bottom would create an annoying rattling on dirt roads.
I had even thought about the possibility of placing the ice chest on top of the rack and quickly dismissed the idea when I realized I would have five days of food and drinks rocketing towards all passengers in the case of an abrupt stop. The only bolt-down points are on the roll bars and it does not tie into the body or the frame at any other point.
If this was for a grocery-getter or soccer mom Jeep I wouldn’t hesitate to put it in. It does help to organize suburban adventures on Saturday morning and payday grocery runs. It does provide a bit of security and for photographers wanting to store gear out of sight it could be a benefit.
We paid $240 for our set up and thankfully the company we ordered from is going to allow us to send it back based upon the product not meeting the expectations we outlined.

Again, the concept is great, and other gear we have from Rampage has fared very well to excellent. The major disappointment here is based on the initial expectations not being met. Show me a Jeep guy that at some point doesn’t throw an ice chest full of grub and suds in his rig for a few days of fun on the trails.