We have all been on that trip.

A camping trip where it rains the entire weekend and you have hours to spend in a trailer, camper, or tent. The Christmas road trip where you get stuck in a hotel for multiple days because roads and passes are closed. The vacation that has you pent up for hours at an airport due to missed or cancelled flights. I started carrying miniature versions of games with me when I was deploying around the globe in support of my military occupation. They were great for keeping me entertained, and sometimes meeting new people.

When the DS or Gameboy batteries or adventures become stale, the internet has been surfed to its end point, one can’t possibly look at another paragraph in that awesome book bought along, and when the boredom monster strikes, we have an arsenal of games we pull out to keep us connected as a family, occupy time, and combat the temptation to flame each other. These are the five games to keep you sane on a road trip, adventure, or vacation.

Uno
This is an old standby that gets overlooked. Don’t worry about buying the mini-version and if you already have the updated Uno Spin, just ditch the wheel and grab the cards. Probably better known here in the U.S., Uno is card game which is played with a specially printed deck. since 1992. The game is similar to Crazy Eights that my Grandpa Turner would play with me as a kid.

The Uno deck has 112 cards. There are 26 of each color (blue, green, red, yellow) each color having two of each number except 0, and 4 blank cards. The numbers in each color are 0 to 9. There are also cards directing the actions of “Skip”, “Draw Two” and “Reverse” Finally, the deck contains four each of “Wild” and “Wild Draw Four” cards.
It’s a fairly simple game to play and we started Abby on it around when she was 8 or 9 years old.

Zombie Dice
I’m just not into the whole Zombie thing. I don’t have a Zombie bug out bag. My rig doesn’t have anything that is Zombie proof. I don’t even have a Zombie hunting permit. But I do have Zombie Dice!

I like Zombie Dice because it is more than luck, you have to take risk with your luck…probably much like a real zombie apocalypse. Each player on their turn has to shake a cup (we use a Crown Royal bag) containing 13 dice and randomly select 3 of them without looking into the cup/bag and then roll them.

The faces of the dice represent brains, shotgun blasts or “runners”. There are various colors of the dice, green, red, yellow. Each color has a its own distribution of faces, the green dice have 3 brains, 1 shotgun and 2 runners, the yellow dice have 2 of each and the red dice have 1 brain, 3 shotguns and 2 runners.

The object of the game is to roll 13 brains. If a player rolls 3 shotgun blasts their turn ends and they lose the brains they have accumulated so far that turn. A winner is determined if a player rolls 13 brains and all other players have taken at least one more turn without reaching 13 brains.

Story Cubes
I have presented these before in our videos and podcast and have even used them to interrupt writer’s block. The idea is to roll the images on these story cubes to make up your own once-upon-a-time type story. We like this game because even though it is simple, it requires someone to think out of the box and be creative.

There are several variations we use other than one person rolling and telling the whole story, we also will have someone roll, and then each takes a turn in telling the story. I also use this as a tool in my presentation skills workshop when working with a team that is highly technical and very little conceptual in their Emergenetics profile.

Timeline
This is one of our latest editions. I was actually a tester for this at a conference awhile back. I like it because we use it to learn more about historical events, inventions, and other interesting happenings of the past.

There are several kits including Inventions, History, and Diversity. We like to mix and match the sets. If you have Internet, keep an iPad or other device close by to look up and learn more about an event or invention.
At the beginning of the game, players all get the same number of cards representing monuments, inventions, etc. On the back of each card is a date.

Once placed, the player’s card is then turned date-side up. If the player was right, it remains on the table. Otherwise, the card is discarded and a new one must be drawn to replace it. The first player to get rid of their cards wins.

Flash
Another rookie to our game roster. This is allot like Yatzee, only way cooler and not as time consuming. Flash is a lightning fast dice game. Players work to rack up the most points as they race through 8 dice challenges. Everybody rolls for a specific set chosen and any player could score.

Flash has several game variations you can play. If it’s an adult party, it could easily become a drinking game.

It comes with its own travel pouch which makes it a game on the go.

You Can Help Support Free Survival and Outdoor Training
Every year we provide free survival seminars to kids and adults. This year we will teach close to 1200 individuals how to comeback alive should they find themselves in a backcountry emergency at no charge. Be sure to check out our website for these games and use any of our Amazon links from there to purchase. All your Amazon purchases go for gear we use in our free survival seminars. 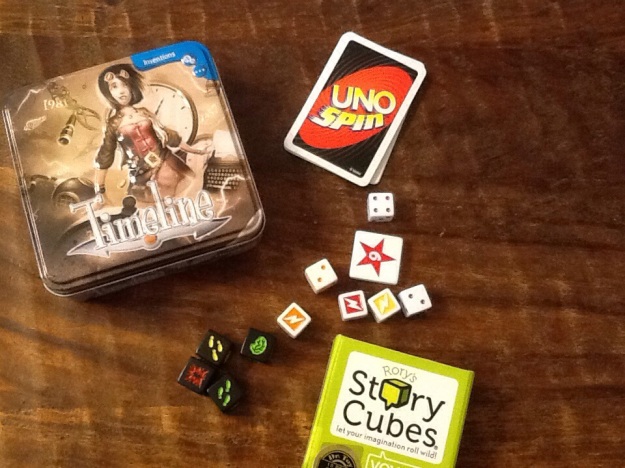