There is something about maps for me. A graphic representation of the earth’s surface as seen from above. The blue, green, red, white, and black depictions. The topographic features that look so odd until you know how to read them so well you begin to depict body features as contour lines… Yes I need help.

I remember as a boy looking at a puzzle map given to me. It was while I was sitting at the breakfast counter in Tempe and looking at the jigsaw cutout of Idaho with a skier in the middle that I made the decision to move to the state. I was six and then thirty-odd years later I followed that dream. When we would travel on the road I would look at the map to see where we were going on road trips. I had postcards of maps. I loved those maps at roadside stops with the little star depicting, “YOU ARE HERE”.

In the military I would learn land navigation and how to look at terrain in terms of tactical advantages. I became very good at the art and skill of using a 1:50000 scale topo map, the compass, and the protractor. I was so good I taught it on a regular basis, was selected to compete in orienteering races, and show new officers how lost they really were.

Before the days of geocaching we would use maps for similar games. I still pull out a map every now and then and go looking for the geeky treasures with old school map and compass.

I collect all kinds of maps. Old maps, foreign maps, aviation maps, underwater survey maps. I have maps from just about every travel….well most. I even have maps of places I have never been to….but will some day. As a student pilot I would comb over aviation charts (not maps) and dream about all the travel I would do by plane. Idaho to Texas is still on the list as well as a coast to coast trip in a single-engine Cessna….time and money being the only barriers right now.

There is something about spreading out a sheet of roads, gulches, hills, and valleys that is not present with a gps. There is something lost by navigating by an in-car system of printing off directions from google or mapquest. The personality of the terrain disappears. We get caught up in “getting there”

Tonight I have a new Benchmark Series map of Idaho. I’m looking directly at an area I plan to do some exploration in. I’m also seeing places we have already been to and my thought is, “holy wow…I didn’t know that was there….” as I saw that the son of Sacajawea is buried a few hours from us.

I often wonder where we should go for our next grand adventure. I have done topographic analysis of the trail that goes from west to east in the Highlands of Scotland, conducted map reconnaissance of the Trans-American Trail, and spent hours in study of the Appalachians.

Looking at a fresh map of my own state makes me realize we don’t have to go far. There are so many things to explore in our own part of the world. Though we may put hundreds of miles of dirt behind us, the trail head for the next adventure begins only 5 miles from my door. 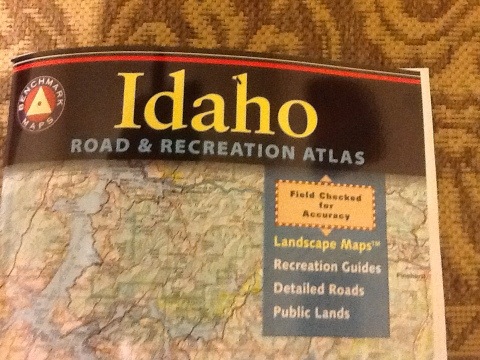