One of the times I felt the most complete in life and that I was making a difference in my community was from about 2000 to 2004. This is when I ran a hockey outreach in San Antonio, Texas.

It started pretty small. I noticed this empty parking lot, really abandoned tennis courts in what used to be one of the premier neighborhoods in San Antonio. At one point the Turtle Creek Club had swimming pools, tennis courts, and a multi-level entertainment complex. Is was the place to meet if you had the wealth. Fast forward to the fall of 1999 and as I drove by I noted it had all fallen into disrepair.

The tennis courts were littered with broken beer bottles, the hedges had grown up, pulling into the lot and looking in a cubby hole in the concrete wall I found a crack pipe. But it was the perfect size for outdoor roller hockey.

I was lucky. My dad took me to Phoenix Roadrunner games back when they were in the WHA. I saw Robby Ftorek, Gordie Howe, and many other greats play in Phoenix. My dad got me involved in playing roller hockey after seeing my first game at 7 years old. This is back when you were on roller skates and not blades. My friends and I played in driveways, basketball courts, and pick up games at the roller rink. We skated to school, all of us sneaky our sticks out of the house in the morning and playing at lunch. We formed our own neighborhood leagues. It was like the movie “Mystery Alaska” but with sunburns and decent acting.

The kids I would soon be working with were not so lucky. Many were from fatherless homes, had a history of abuse, often left alone to their own ideas of entertainment, and a majority had a family member incarcerated.

I started that first day by bringing out a bag full of hockey sticks. I set up a goal and threw on my skates and gloves. It was good practice for me. I was playing with a pick-up/travel team at the time. Being the oldest guy on the squad, I need as much stick time as possible. At first I just skated alone, dribbling the ball, flicking it at (not always in) the net. A couple of kids wandered over. After a few minutes we had our first game going. In a few weeks I would randomly get between 5-8 kids. Some had skates, others we provided them for them. Not loaners…their own skates.

I became pretty clever in getting equipment. I would show up at garage sales with a flyer about what we were doing and how we were reaching out to the community. If someone had skates, I would ask them if they would be willing to donate them IF they didn’t sell by the end of the day…most of the time they gave them to me anyway. I would ask for old hockey equipment at the ice rink, from my team mates, from the local pro team. The San Antonio Iguanas gave me practice jerseys from their defunct roller hockey camp. They provided game tickets to any kid who could come out to the games.

We had a regular schedule going soon. I would show up at the parking lot every Monday, Wednesday, and Saturday. Like clockwork (and after a little training) my new hockey team would be waiting for me when I showed up, pull brooms out of the truck and begin sweeping all the broken glass out of the way, set up the goals, and layout pads, helmets, sticks, and other gear.

The format was simple. Throw your stick in the pile, mix them up, that’s the team you were on. We would play till one team got to 5. No cussing, no fighting, no checking. Between games we talked about stuff going on in their lives, after the game we would do homework with them. If you came to play and you were high or if you broke the rules, you were suspended. Most of my players were users, only one ever came high.

I had an awesome crew of volunteers. I never asked for cash, just for people to do two things for me:

1) Show up with sandwiches or a cooler full of sports drinks. We would have “fans” sitting in the back of pick-up trucks, hoods of cars, even lawn chairs to cheer the guys on. These were kids from a rough section of town, living in rough houses, and rarely heard good things about themselves.

2) Find and buy gear for my team. I would have my “boosters” find and buy skates, sticks, pads, etc. I wanted them to shop for these kids as if they were their own. Its amazing what a woman with a weekend of garage sales in her sites can find and my lady boosters were fantastic.

I also had a great contingent of guys come out to teach skills. Guys from my parking lot team, many who had grown up in similar situations quickly answered the call. We even had a few visits from the Iguanas. My guys were pumped.

I eventually took over the coaching role for several YMCA teams just getting started and not only navigated the start of a cool program, but also lobbied hard to not let it fall into the “we don’t keep score” ideology. At the time I served on the board, it was the only YMCA sport that not only kept score, but also had a scoreboard and a championship play-off.

In 2003, we were recognized as a Sears Hometown Hero and were given $1000 to put towards our program. Knowing that all our needs were met, I wanted the money to go towards scholarships for any of my hockey guys to play in any sport the YMCA offered.

At the end of 2004, I merged my program with the YMCA’s hockey program. I grew from three kids in tennis shoes and a home-made net to thirty-four regular attendees, enough sticks, pads, skates, and goals to field four complete teams, and an active roller hockey community. I transferred all equipment and players to the YMCA in November with two conditions:

1) My players receive transportation to the YMCA

Not only was this a time I felt like I made a difference, it was also a time I found out who was willing to get behind me and my vision. Organizations that I hoped would help, like the three churches within a ½ mile of the parking lot not only would not lend a hand, but one even stated “we don’t have the infrastructure to support those kids”.

My real support came from co-workers, friends, the manager at Taco Bell, even the night club owner who’s property we were on. (He was told by his attorney that we were a risk and he should have us removed for trespassing, instead he thanked us for picking up the glass and trash). Gang-bangers who knew what I stood for, and when there was an imminent threat of a drive by, stood by and protected our game. The police officer who was an ex-college hockey player that would park his car at the end of the lot and hit the siren when a goal was made was a huge hit for everyone and we appreciated his presence. The school teacher who would call us because one of my guys was skipping class and his mother told her to call me. She and I worked to get him though the 8th grade.

I never had any fights break-out, my five for fighting were really five kids that I really fought for. They were the ones in the worst situations. Not sure where they are today, but at least for a brief period of time, they knew that they were valued. 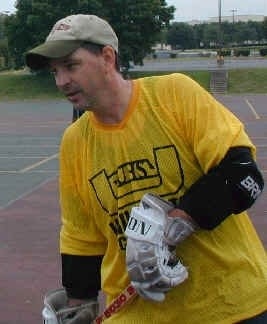